Shoebury is a magnet for visitors, boasting stunning parks, delicious eateries and attractive sandy beaches, all the necessary components for a memorable summer holiday. However, the long history of weapons testing means that there’s more to this seaside town than meets the eye, with the coastguard discovering high explosive ordnance in the summer of 2020.

Shoebury Calls In The Army

In August 2020 a suspicious object was discovered aboard a vessel that was lodged beneath the Barge Pier. This strange item was closely examined by the coastguard, with the alarming conclusion that it could be unexploded ordnance, for which they called in experts from the army’s explosive ordnance disposal team (EOD). Local community agencies worked together to prepare the scene, cordoning off the area and setting pagers to sound when the potential UXO was exposed by the retreating tide.

Military experts x-rayed the device, and after analysis confirmed that it was indeed a high explosive bomb that was likely manufactured between the 1940s and1960s. After much discussion with police, rangers, community officers and the coastguard, the decision was made to detonate the bomb a short distance away on the mud flats. EOD eliminated the threat with an upwards explosion, having prepared the ordnance in a way that reduced the risk of flying shrapnel. 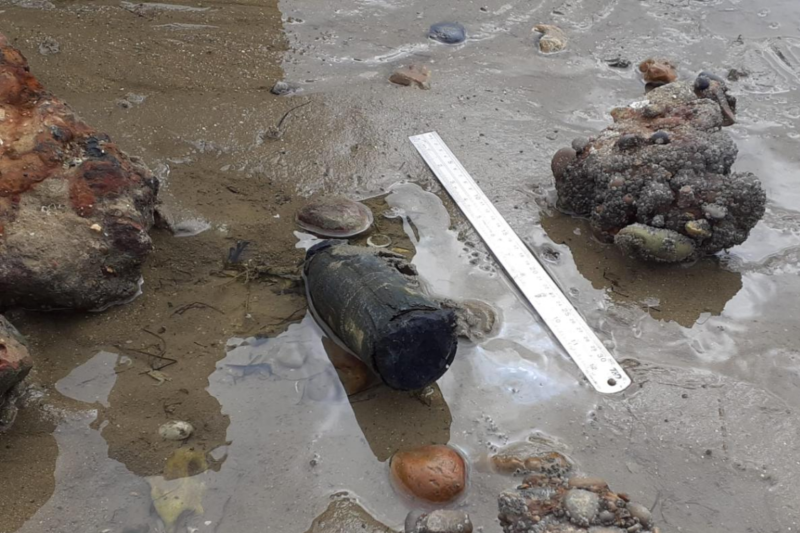 As dramatic as this situation appears, Shoebury is more familiar than most places with unexploded devices and ammunition, as the area has a long legacy of testing powerful weapons.

Shoebury began its military career in the 1840s when it was chosen for weapons testing during the Crimean War. This area, known as the ‘old ranges’, played a role in developing shrapnel, rockets and quick-fire weapons, although it continued to be very busy during the 1914 and 1939 wars. The ‘new ranges’ were opened from the early to mid-20th century, assessing grenades, shells and guided missiles from Shoebury East Beach all the way to the idyllic Foulness Island. This new site became the centre for all kinds of new innovations during the Cold War, with atomic weaponry on the agenda in the 1950s!

The recent 2020 find was estimated to have come from defence activities between the 1940s and 60s, although the general area of Southend was also heavily bombed by the Luftwaffe. This landscape was often used as a dumping ground for unused munitions, leading to numerous unexploded bombs scattered across the area.

Not The First Time

This is not the first time Shoebury had to deal with unexploded ordnance and it’s unlikely to be the last.

Shoebury East Beach was also closed in 2014 for the MoD to check for hidden UXO, after guns, shells and artillery were found, provoking economic uncertainty for a town whose trade relies on tourists flocking to the beaches. Yet they’ve been facing restrictions because of unexploded ordnance for years, with the council forbidding metal detecting and digging in parks and certain areas of coastline, as shock and vibration can trigger old devices.

These precautions and the instruction to report any suspicious items to the police underline the fact that this won’t be the last time unexploded munitions threaten the day-to-day life of the town of Shoebury.

At Brimstone we offer comprehensive bomb disposal, alongside various risk mitigation services. Visit our website or contact us to enquire on 020 7117 2492.